The green of the nature,
the blue of the sea,
the scenary of extraordinary sunsets,
are a reserve of emotions
whose take care over time
to whom choose to live a holiday of serenity
and full relax in our houses
of Cefalù and Finale of Pollina.
White House Pollina/Cefalù Primacroce in Cefalù

There are many versions on the birth of the name of Cefalù.

A number of historiens pretends it comes from the Greek Kephaloidion or Kephalè, that is head, others from the Punic Kefa that remembers the rock (a mountain which dominates the Middle-Age bourg.

The Norman domination (XII A.C.) started a period of artistic splendour and economic power until Cefalù become an Episcopal seat. 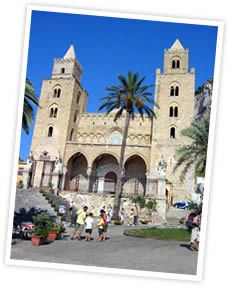 What to see: The Cathedral (started on 1131 A.C.) is one of the most beautiful Norman monuments, with three naves and the absidhal mosaic of the Christus Pantocrator.

The Osterio Magno (XII A.C.) was the residence of the King Ruggero II.

The Middle-Aged Laundry was dig out on the rock at the end of the river Presidiana.

The Mandralisca Museum hostes the “Portrait of Unknown”, by Antonello from Messine, the archeologic, numismatic and malachalogic collections and a library.

What to do: Excursion to the top of the Rock, to visit the Diane’s Temple and the Megalithic Walls to defend the town.

Visit of the Gibilmanna’s Sanctuary, destination for many pilgrims. Adjacent to the Sanctuary, there is the “Museum of the Capucin Brothers” with artistic, ethnoantropologic works and many examples of liturgical clothes.

Coast to Coast by boat at the local port.

Excursion to the Eolian Islands. 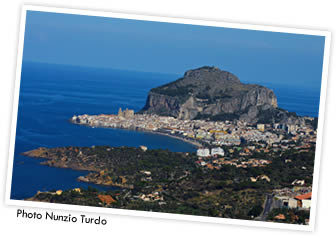 Festivities: The Saint Salvator Fest, the saint protector of Cefalù, from the 2nd until the 6th of August, with its “sea pylon competition” to get the flag with the saint, at the end of the wooden pylon over the sea. Fireworks to close the festivities.

The “Pasta with meat and blackeggs” Feast, a typical local plate, held at the end of August.

The “Blue Fishes” Feast, at the beginning of September.

The Sherbeth Festival, the icecream festival at mid-September. 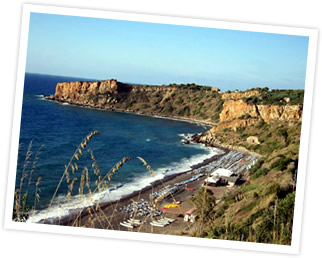 Pollina, perched on a top of a rock in a panoramic position, owes its name to the God Apollo. The little town hostes a middle-aged castle, dated of XI A.C..

Finale of Pollina, directly on the sea, was born around another castle, built by the Saracens, and around a nobile residence, belonging to the Princes of Valdemone of Pollina.

What to see: The Mother Church, XIX A.C., offers an engraving of the Nativity (1526) and the “Maria of the Graces” by Antonello Gagini. 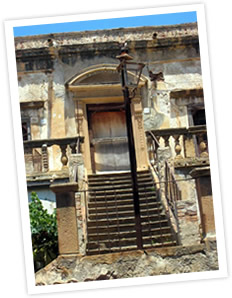 At the basis of the castle, a squared tower, the “Pietrarosa” Theater, with its semicircle shape, digged into the rock and pinked by the sun, dominates a valley of magic little towns.

In the main square, the “Manna” museum, a local production, a natural sweetner from the cortney of the trees.

Festivities: The second weekend of July, the Saint Julian Festival, the protector of Pollina.

The second weekend of August, the “Maria of Letters” Festival, the protector of Finale of Polline.